Takeru is a tall young man with straight, cheek-length brunette-colored hair and squinted eyes. His usual attire consists of a military uniform, which includes a buttoned-up green-colored jacket, trousers, and dark boots. Noto also has a habit of wearing layers of clothing, making his hands and body seem much larger than it is and allows him to hide within his outfit to dodge attacks. When on official business for Company 2, Takeru wears a dark cape and a hat, both of which have a cross-like insignia on them in the form of a button. He also wears bunker gear, which consists of a protective outer jacket, dark trousers, and dark boots. Parts of his outfit are coated with blue lines. He also dons a helmet and protective gloves. Takeru's outfit contains patches with "2" on them, which signifies his affiliation to the 2nd Special Fire Brigade. After the battle with the Purple Haze in the Nether he sports two metal prosthetics replacing the forearm and leg he lost during the battle. 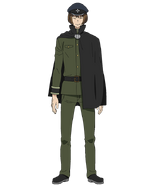 According to his comrades, Takeru has a huge body and a small spirit.[2] He has shown to be very polite and, despite having potential, dislikes being praised for his ability as a Third Generation. Takeru dislikes any sort of confrontation in spite of his role and potential.[3] However when angered he shows the strength to battle powerful opponents without hesitation and stops at no cost to achieve his goal.

Despite being a Fire Soldier, Takeru has pyrophobia. Despite having an inherent resistance to fire and burning, he panics at the thought and sight of fire, including his own flames. Takeru's fear led him to join a Special Fire Brigade, as he thought that he would be safest among people who specialize in putting out fires.[4] As a potato farmer, Noto has tremendous enthusiasm and knowledge for the crop and is able to discuss it with confidence. In addition to having a positive relationship with his mother and other members of Company 2, he has a notable attraction towards Tamaki Kotatsu despite his nerves. If pushed to protect someone his personality changes a bit to more of a confident fighter but more acts like a stubborn wall of power.

While growing up in New Qingdao as a Third Generation, Takeru didn't want to go to Tokyo to join the Fire Force. Eventually, he was forced to join and went onto become a member of the Special Fire Force Company 2, where he became associated with Hajiki.

Takeru is a Third Generation pyrokinetic who can produce flames in the form of weaponry and explosives. Due to his personality and lack of control, he typically creates missiles. When fired, these flames are strong enough to shake buildings as large as the Haijima Industries and blast through solid concrete before exploding. Captain Honda believes that Noto has a tremendous amount of destructive power but his nervous nature and lack of control make him dramatically weaker.[5] This can also be attributed to his fear of flames, including his own, causing him to panic and fire them without thinking or aiming correctly. He can create missiles in the air by making them spin. Rekka Hoshimiya praised Takeru for being exceptionally talented.[6] When calm and collected, in addition to having the physical strength to knock foes away, Takeru shows the ability to create other forms of weaponry using his abilities including miniguns, bombs, and missiles of all sizes. He is able to expand these bombs to be larger and larger to increase their destructive power.

Somehow he is capable of "regenerating" his body (or the clothing that acted as decoy) as shown when his body was seemingly torn apart by Hajiki and he shrugged off the entirety of the damage, appearing seemingly unharmed. Although his body can still be harmed by well-aimed attacks or if his layers are stripped away throughout the battle. Juggernaut specializes in long-range strong combat preferring to hit from range reducing the enemy number by sheer firepower but if pushed switches to close-range attacks that unfortunately can hurt himself as well.

Takeru participates in the Rookie Fire Soldier Games alongside other new recruits from other Special Fire Brigades. When the simulation competition begins, he races towards the building. Stopping in the middle of the race, he begins panicking and uncontrollably bombards the building using his Ignition Ability. Later, when the top of the building explodes and bursts into flames, he dodges falling debris until Gustav rescues him from being crushed. The ordeal results in the cancellation of the tournament, leaving Takeru unable to compete.

While at the Special Fire Base 2, Gustav wishes Takeru good luck with the training alongside the Special Fire Force Company 1 and tells him not to slack off and fall behind the Company 5 and 8 recruits. Takeru later joins Tōru Kishiri and the Fire Soldiers from the 8th to visit the 1st Special Fire Fighting Cathedral. In the training grounds, Takeru is matched against Rekka Hoshimiya, who is astonished by his raw power as a Third Generation. When Takeru attempts to attack Rekka, the Company Commander dodges the myriad of missiles, forcing Karim Flam to step in and freeze the attack. Afterward, he settles in with Arthur, Shinra, and Tōru in the 1st Brigade's dorm rooms, until their peace abruptly ends when Tamaki Kotatsu informs them of an Infernal sighting, ordering Takeru to join Rekka and his squad for the duration of the mission. Takeru and Tōru later attempt to distract Karim to allow Shinra and Arthur to search Karim's room in exchange for Tamaki's phone number. In the aftermath of Company 8's investigation, the training assignment is cancelled and the four recruits are sent back to their original Companies.

When Shinra is in danger of being captured by the White-Clad, Takeri and Tōru appear to save him. The explosive duo manages to bombard the cultists with a combination of Tōru's Backdraft Bubblish Gum and Takeri's missiles to great effect, allowing Shinra to pursue Inca Kasugatani. Following the fight's ending, Takeru comments that the White-Clad have gotten stronger.

In the Special Fire Force's mission to uncovering the truth behind the Great Disaster, Takeru was selected to guide six other brigade members to the Chinese Peninsula. Upon boarding Toryū, the group leaves the Tokyo empire and travels to New Qingdao. After disembarking, Takeru reunites with his mother, and the two discussed something devastating the potato fields. As the group prepares to head out, Takeru apologies to his parents for not finding out who destroyed the fields. Once they leave his parents and continue the mission, Noto and the others quickly fall under the influence of a fast-acting gas that intoxicates them. Resulting in Noto firing his missiles at a rock on the horizon. They are soon attacked by a giant work, during which a talking mole called Schop takes refuge on their truck after Noto notices that he is the person that has been stealing from his family's farm.

During the investigation into the facilities of the Netherworld, Noto is partnered with Tamaki underneath Hajiki's command. When an explosion takes the group by surprise and large numbers of Infernals begin attacking the group, Noto and Tamaki stand back as Hajiki extinguishes all of the Infernals. Afterward, the group are approached by Orochi who manages to kill Hajiki almost immediately, before overwhelming Tamaki. Intercepting a lethal attack on his comrade, Takeru manages to free Tamaki from Orochi's grasp with a missile after finding his resolve to be strong. His initial, controlled attacks are unable to break past Orochi's defenses or are successfully countered and Noto finds himself at the mercy of her Medusa Whip. Despite her effortlessly destroying layer after layer of his clothing and eventually cutting into his body, Takeru continues to fight. Eventually, he charges towards his opponent and creates a bomb in his right hand and keeps adding power to it until he is directly above Orochi. She attempts to stop him with her whip and successfully cuts off Noto's hand, but only after Juggernaut throws the bomb at her. She is crushed by the explosive's sheer weight before it detonates and the both of them are consumed by fire. Having successfully avenged Hajiki and protected Tamaki from their enemy, Noto begs her to escape without him saying he would only slow her down. Once he finally falls unconscious due to his injuries the pair are swarmed by a horde of Infernals and reanimated bodies. Tamaki vows to bring him back to the surface and fends off the attackers until more White Clad arrive who finally defeat her, only to be defeated in turn by Captain Honda and Obi.

Takeru is revealed to have survived the battle with Orochi by getting medevaced out via a hole in the roof of the Nether. He, unfortunately, loses his forearm and leg which are replaced by metal prosthetics. He is called upon to help destroy a pillar using his abilities but is stopped by Shinra appearing.

Takeru appears in this arc.

Community content is available under CC-BY-SA unless otherwise noted.
Advertisement