Originally humans, the phenomenon of Spontaneous Human Combustion causes their bodies to spontaneously ignite, and transform them into a misshapen fiery charcoal-like monster. Because their body is burning, they constantly feel terrible pain, and said pain causes the victim to go berserk and start attacking everything and everyone around them. SHC is the most feared cause of death in today's society.[1]

The cause of people transforming into Infernals can be traced to the realm of Adolla, an alternate plane of existence that is connected to the collective unconscious of mankind. Within Adolla, there are beings known as Doppelgängers, alternate versions of people in the human realm, born from the common perception of how other people see their human realm counterparts. SHC is caused by doppelgängers encroaching into the bodies of their human world counterparts.

Individual Infernals are known to widely vary in terms of physical appearance; some are big and bulky while others are lanky with long, thin limbs, some have gear-like teeth in place of lips, and some Infernal's aren't even humananoid in body structure. Though, regardless of these differences, they all take the form of a black figure who is at least partially enveloped in flames.

Because of the intense pain they constantly feel, they are unable to think straight and have no sense of reason. This causes them to go on a wild rampage. However, there are a rare few Infernals that do not rampage and instead just sit in place, and there are even some that keep their memories from the time they were human and retain the ability to think, if their will is strong enough. It appears that Infernal's gradually regain their senses over time, despite still being in great pain, as seen with Tempes followers.

Infernals gain a noticeable increase in strength and agility after their transformation. Additionally, they can control the flames generated from their bodies, allowing them to launch fireballs, unleash a wave of flames, and a few are even able to control their fire well enough to shape it into weaponry. Infernals have also shown the ability to absorb and redirect the flames around them.[2]

Infernals are considered to be a dangerous threat to human life and the world, that is why the Special Fire Force has been tasked with extinguishing their bodies and purifying their souls. If they are not put to rest, Infernals rampage until their lives flicker out, which can take centuries as they do not age. Some of them are more adept in combat than others.

The only known way to kill an Infernal is to impale their core, located in their chest, which is a painless method of releasing them from their suffering. Humans in the Tokyo Empire typically have a Priest or Sister recite a prayer for the souls of the defeated Infernals as they are killed, as a means of purification. The citizens of Asakusa and China do not follow this practice, showing that the prayer is not a universal custom.

It is possible for someone to transform into an Infernal on command and even transform back just as easily, as demonstrated by Dragon. This self-Infernalization gives him a tremendous boost to his strength and durability. It is currently unknown how the transformation can be controlled, but Dragon did imply that it has something to do with understanding the true nature of Adolla and the doppelgängers.

This type of Infernal has dark, charcoal skin and is perpetually on fire, although their appearance differs. While typically mindless, an Infernal's behavior can be influenced by any strong desires or personal connections they had as a human. Meaning that they may remain in a certain area. While powerful and dangerous, they can be restrained by a physically strong human for a short time.[3] Animals, such as dogs can become infernals as well, such a creature is called a Hellhound.

A Demon Infernal is a more powerful type of Infernal, characterized by their more powerful offense and more durable bodies that can only be damaged by extremely strong attacks. They are primarily distinguished by the fact that they have horns on their heads.

It is known that if a person transforms into an Infernal while having a strong attachment to life or great willpower, they will keep their self-awareness, however the level of consciousness differs between individuals.[4] These Infernal have control over their flames and can discharge them at will, while also being fully capable of speech. It is unclear if they suffer any pain after they transform into an infernal.

Both regular and demon type Infernals have the potential to be sentient.

Artificial Infernal are humans that were turned into Infernal via unnatural means.[5] Unlike regular Infernal, the heads of the Infernal are the only thing to ignite. After conducting research on Artificial Infernals and natural ones, Hibana discovered that the difference between them was that the core of an Artificial Infernal specifically located at the upper body had been eaten through by the Bug and left some of its biological residue and DNA inside the body.[6] It is believe that the Infernal of immense size with multiple cores are also artificial. In Episode 44 and Episode 45, some Infernals are created through Necro Pyro by using dead human bodies.

A Great Infernal,[7] also called a Giant Infernal[8] is the result of Necro Pyro being used on corpses to merge with an Infernal. Depending on if the Infernal used for the base is built for fighting, determines the strength of the colossal Infernal.

A Titanic Infernal[9] is an enormous infernal that is born from one of the gigantic Stone Pillars that arise on the coast of Tokyo in the prelude of the second Great Cataclysm. They have the greatest raw firepower of any Infernal's seen so far. Once they are defeated, their ashes join together with the Stone Pillar which spawned them.

A canine Infernal, a Hellhound. 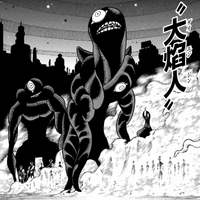 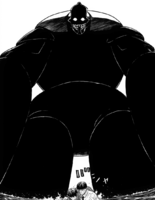